What is carbon capture and storage (CCS)?

CCS broadly refers to technologies that can capture and store carbon dioxide to mitigate climate change. Mitigation can happen in one of two ways- preventing emissions from entering the atmosphere by capturing CO2 from emissions sources and storing it permanently, or removing CO2 directly from the atmosphere and storing it. The latter pathway is referred to as carbon dioxide removal (CDR).

The only way to combat human-caused climate change is to drastically cut emissions and decarbonize immediately.

Much of the current industry is focused on developing CDR technologies based on the common belief that capturing and storing CO2 from emissions sources only encourages the continued use of fossil fuels. To meet the goals of the Paris Agreement, we need a zero-emissions world AND we need to scale up CDR technologies in order to remove “legacy carbon” that is already in the atmosphere from decades of emissions. There is a wide variety of CDR approaches being developed, and frankly we need all of them. Basalt weathering is currently being researched in two main ways as a method to remove and store atmospheric carbon dioxide.

Part 1 of the long-term carbon cycle is the basis for enhanced rock weathering, which generally involves the crushing of basaltic rocks or the mafic minerals within these rocks (such as olivine) and dispersing the powder either in terrestrial (e.g., agricultural soils) or coastal settings. By crushing rocks, reactive mineral surfaces are exposed, and weathering can proceed much faster than it would naturally.  Because agricultural soils have high CO2 concentrations (and we learned above that elevated CO2 levels accelerates weathering), croplands are being researched as enhanced weathering sites, and there may be co-benefits beyond CO2 drawdown. Additionally, lots of waste materials from industrial operations are rich in divalent cations needed for CO2 mineralization, thus there is an active area of research on the subject of repurposing mine tailings for carbon capture and mineralization. Because the weathering reactions are being accelerates at the surface Earth, these technologies are often referred to as “ex-situ”. Enhanced weathering draws down atmospheric CO2, and it enters rivers as bicarbonate, that eventually flows into the oceans where Part 2 proceeds naturally. Because enhanced weathering pulls CO2 out of the atmosphere, it is a method of CDR.

Unlike enhanced weathering, mineral carbonation of basalts is a carbon storage technology, not a carbon removal. This technique involves the injection of CO2 into basaltic rocks in the subsurface (or “in-situ” carbon storage). The injected CO2 can be sourced from CDR technologies such as Direct Air Capture (DAC), or from emissions sources. Chemical weathering reactions (Part 1) result in the dissolution of basaltic minerals in the subsurface, and cause the subsequent precipitation carbonate minerals (Part 2) underground. Mineral carbonation combines Part 1 and Part 2 of the long term carbon cycle, and mineralizes the carbon into a solid form on the order of ~2 years. Because the carbon is eventually stored as a mineral (aka “mineralization” or “mineral storage/trapping”), this method of carbon storage is permanent and secure. Unlike enhanced weathering, mineral carbonation has been proven to be successful in pilot field studies. Additionally, it is less energy intensive, as no crushing and transport of rock powder is needed. If scaled, mineral carbonation can serve as a leading carbon storage method.

One Icelandic company, founded by scientists who pioneered mineral carbonation, is already actively turning CO2 into stone. CarbFix has a fantastic website where you can extensively learn about mineral carbonation, how and where it works, and the potential scalability of their method as a major solution to climate change. The CarbFix method uses fresh water and CO2, where CO2 is dissolved into water (essentially the same way that soda is carbonated), and the CO2-charged water is injected into the basaltic subsurface. This method requires about ~25 tons of water per ton of CO2 stored, but is very effective at rapid mineralization.

Water availability is an obvious limitation to scaling mineral carbonation to gigaton/year scales, which is the absolute minimum of what is needed to reverse climate change (again, in combination with drastic emission reductions). Scaling offshore and using seawater is the next step. Seawater has been proven to be effective in experimental settings, and CarbFix is gearing up to test it in the field. Research is also underway examining different forms of injected CO2, for example, supercritical (liquid-ish, google it) CO2 as opposed to dissolved (aka soda water). The Wallula Basalt Pilot Project out of the Pacific Northwest National Laboratory tested an injection of pure-phase supercritical CO2. The good news is that the entire ocean floor is made of basalt, so when we figure out how to optimize the method for scaling offshore, there is limitless storage capacity.

My currently research involves constraining the transport and fate of injected pure-phase CO2 in basaltic reservoirs using reactive transport modeling. Using geochemical, geophysical and mechanical property data from real-world examples, I can simulate where injected CO2 will go and what chemical reactions will happen along the way. This allows for the determination of optimal injection scenarios that maximize carbon mineralization. 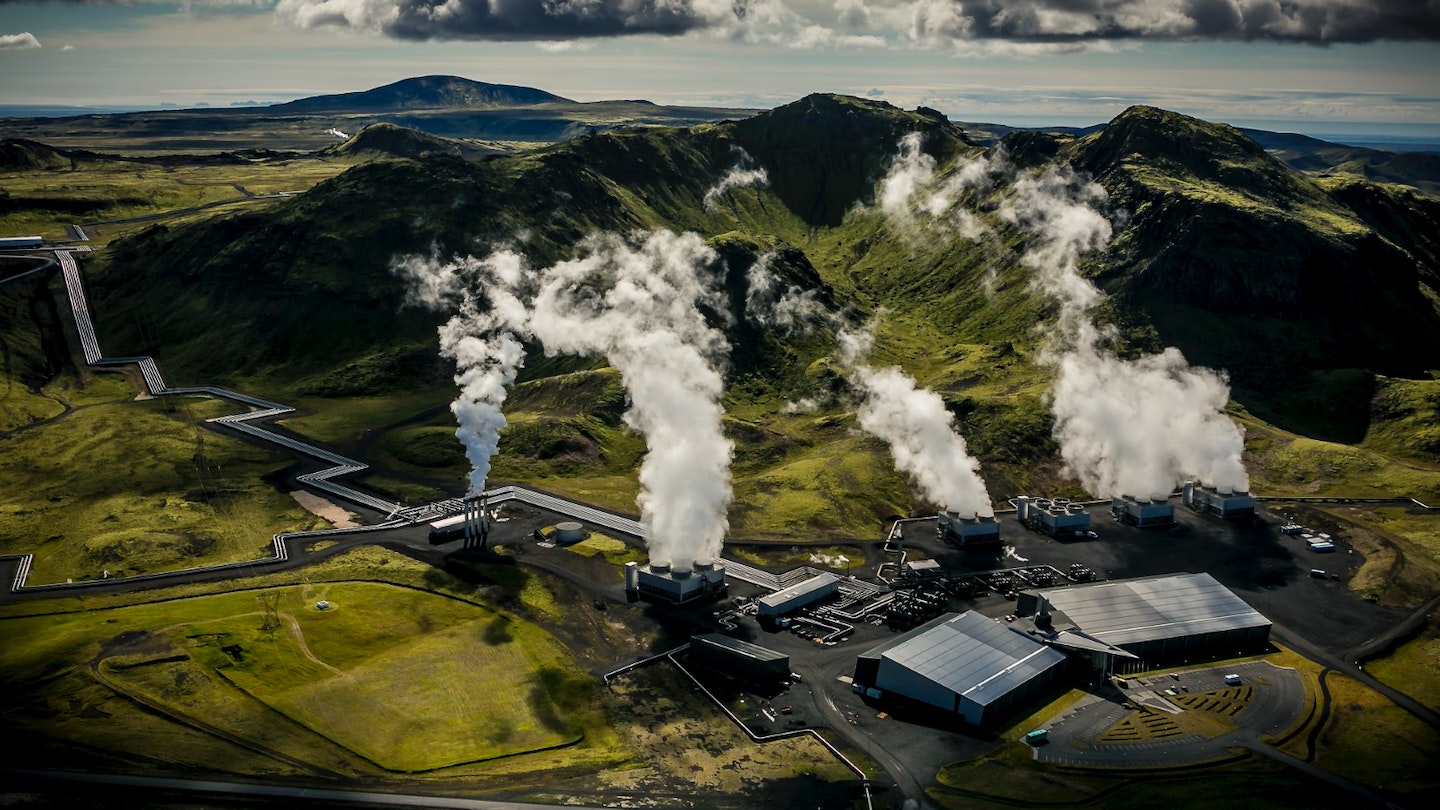 Photo of the Hellisheiði geothermal power plant in Iceland, where the first CarbFix projects are in operation. Photo source: CarbFix.

For more information and consulting appointments, contact me at cnelson at ldeo.columbia.edu